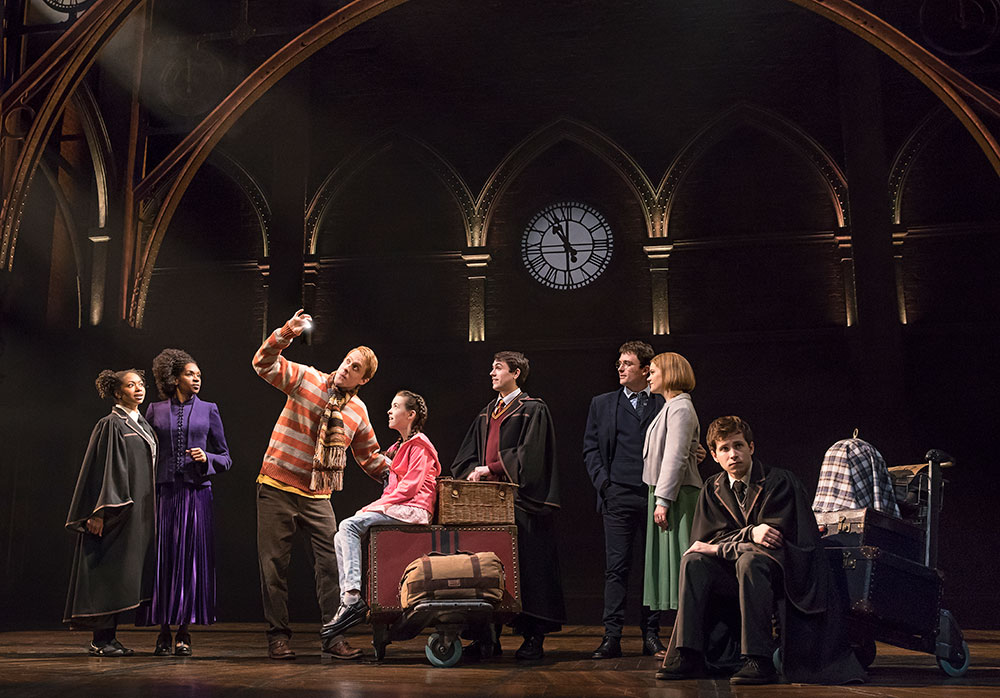 Harry Potter and the Cursed Child will return November 16

Harry Potter and the Cursed Child, the world’s most award-winning play, will return to North America as a newly staged, one show magical experience. Performances of this world premiere theatrical event begin at Broadway’s Lyric Theatre in New York on November 16, 2021.

Broadway tickets go on sale to the general public on Monday, July 12, 2021. For more information and to sign up for pre-sale access, please visit HarryPotterOnStage.com.

Harry Potter and the Cursed Child originally cast a spell over the world as an epic two-part event. Now, the show has been boldly restaged as one singular performance by the award-winning creative team for its return to North America. With just one ticket in hand, audiences will enjoy all the adventure the continuation of Harry’s story entails in one magical afternoon or evening.

Based on an original new story by J.K. Rowling, Jack Thorne and John Tiffany, Harry Potter and the Cursed Child is a play by Jack Thorne, directed by John Tiffany.

Sonia Friedman and Colin Callender said: “We are delighted to announce that Harry Potter and the Cursed Child, which since its triumphant opening in New York and San Francisco has seen record breaking numbers of people spellbound by the wizardry on stage, will be returning in North America in a new, re-imagined version that audiences can see in one afternoon or evening.

This is an unprecedented moment in theatre history. After being closed for more than 15 months, almost all of Broadway and theatre across North America will return before the end of the year. Given the challenges of remounting and running a two-part show in the US on the scale of Harry Potter and the Cursed Child, and the commercial challenges faced by the theatre and tourism industries emerging from the global shutdowns, we are excited to be able to move forward with a new version of the play that allows audiences to enjoy the complete Cursed Child adventure in one sitting eight times a week.

Harry Potter and the Cursed Child is already the longest-running two-part play in Broadway history. The new version of the play has the potential to thrill audiences for many years to come.

Though the global shutdowns were awful and devastating on so many levels, they afforded us, as theatre-makers, the rare opportunity to reunite with our award-winning creative team who fully embraced the challenge of creating a new single part version of the play that would be a compelling theatrical experience in its own right and stand shoulder to shoulder with the original two-part version. It’s been the most wonderful process of rediscovery to bring this new spectacle to life while still delivering all the amazing magic, illusions, stagecraft, and storytelling set around the same powerful narrative, that has enthralled audiences and critics alike.

Bringing Harry Potter to the stage to cast its spell on audiences in North America has been an extraordinary journey. We want to thank our creative team, associates, cast, crew and all those who have tirelessly worked on the production for their unflagging support and commitment as we embark on the next leg of our journey.

Harry Potter and the Cursed Child is a story about community, family, and the power of friendship, a story that reminds us that together and united we have the strength to overcome all odds. It’s a story of our time and we can’t wait to share this new version of our play with our amazing audiences in North America. We’ve missed you enormously and look forward to welcoming you back to Hogwarts. That’s the magic of the theatre—It’s every bit as alive as the portraits hanging on Hogwarts’ walls. Because for all of us… it’s time to believe in magic again.”

Jack Thorne and John Tiffany said: “We are incredibly excited to be returning to the US with this reimagined Harry Potter and the Cursed Child. We’ve been working hard on this new version throughout lockdown and it’s been a joyous process of rediscovery. It has given us a unique opportunity to look at the play with fresh eyes and we have been inspired by the entire creative team every step of the way.”

J.K. Rowling said: “Collaborating on Harry Potter and the Cursed Child has been one of the great joys of my professional life. While no one would wish for what has happened over the last year, it has given Jack, John and the first-class creatives who first breathed life into the production the opportunity to revisit the play, and to find a new way to frame our story—with amazing illusions and some exquisite new staging—all the while keeping our original story intact. I’m so proud to be associated with this new, reimagined version, and to be able to welcome back audiences to the Lyric theatre.”

19 years after Harry, Ron and Hermione saved the wizarding world, they’re back on a most extraordinary new adventure – this time, joined by a brave new generation that has only just arrived at the legendary Hogwarts School of Witchcraft and Wizardry. Prepare for spectacular spells, a mind-blowing race through time, and an epic battle to stop mysterious forces, all while the future hangs in the balance.

Health and safety protocols for the theater going experience will be announced closer to the start of performances. We will be adjusting to all industry and government guidance to keep our audiences and company safe.